The Spine Chillers is an episodic comic strip about the time the world’s greatest writers shared a small boarding house, living together to create some of the most loved thrillers and horror stories of all time. Marvel at HP Lovecraft’s inspiration for Cthulhu, gasp as Ambrose Bierce struggles under the weight of his own creative output, and marvel as Edgar Allan Poe and Sir Arthur Conan Doyle mud wrestle to determine once and for all who is the better horror writer.

Volume 1 collects the first two year run of comic strips, all the way from ‘Feet!’ through to ‘Meet Cthulhu.’ Genuinely funny whilst also at times tender and touching, The Spine Chillers collection is a welcomed cultured tonic during these trying times.

Written and drawn by Ben Clark.

Comic genius Ben Clark is the creative talent behind the strip:

“My idea for the comic strip was to take the writers from The Spine Chillers audiobook series, and have them all live together in a grotty, 1950s style boarding house, with a serious boss of a landlady called Mrs Parkinson, who may have sinister plans of her own. I thought the boarding house backdrop provided the most scope for stories, conflict and most importantly, jokes. One thing I have to stress is that it is not my intention to belittle or insult these wonderful writers, many of whom are among my greatest heroes. I’ll be taking the Mickey, but in an affectionate way. What I always attempt in my comics is to be silly, and to make people laugh. The characters I am working on are of course not how these men were in real life, but a daft alternate version, which hopefully people will find amusing!”

– John Freeman, Down the Tubes

“The Spine Chillers joyfully wallows in the irreverent traditions of British comedy.”

Now you can experience all the fun of literary fiction with our inaction figures! Yes! You too can help Poe, Bierce and Lovecraft embark on authorial adventures. Use this link to download your own set of original figures now 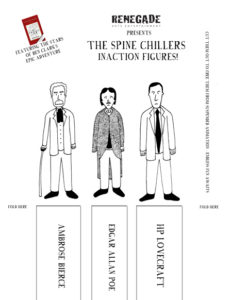 There are no reviews yet.

Be the first to review “The Spine Chillers” Cancel reply